It goes without saying, but Woody Allen is a master story-teller. Sure some of his movies can move a little slow, but there’s no denying the complexity of emotion in each one. While I have a few favorite movies of his, there is one that spoke loudly enough to make me start thinking. One that actually had two storylines: one comedic, and one dramatic: 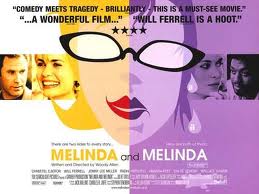 In Melinda and Melinda, the story opens with a small group of writers at writers. Their conversation revolves around tragedy vs. comedy: Are our lives naturally comedic, or dramatic? As with any eclectic group of writers, you’re going to have two arguments to that question:

Comedy writer: “The essence of life isn’t funny, it’s tragic…there’s nothing intrinsically funny about the terrible facts of human existence.”

Tragedy writer: “If the underlying reality of our being is tragic, my plays would make more than yours at the box office because my stories would resonate more profoundly with the human sow.”

Comedy writer:  “It’s exactly because tragedy hits on the truly painful essence of life that people run to my comedies for escape. Tragedy confronts. Comedy escapes.”

So now the argument is: is there a deeper reality in comedy than tragedy? Thus begins the proposal of a simple story: a distraught woman knocks on a door and disrupts a dinner party. And from there we’re taken on two different journeys, both starring the same protagonist (Radha Mitchell, though originally Allen wanted Winona Ryder).

It’d take too long to take you through both of the stories, but here’s a quick breakdown:

Tragedy: Melinda is a psychologically troubled woman who had it all at one point in time: a doctor-husband, two children, and a wonderful home in suburbia. But she becomes entangled with a photographer, falls in love with him, and all she had is now shattered. She can no longer see her children and that pushed her into a mental institution. By the time she interrupts the dinner party, hosted by one her college friends whose husband is trying to woo a play producer into granting him an important role, she’s come out of the institution and is still trying to get her life together, but unfortunately isn’t able to do so.

Comedy: Melinda is a woman who fell in love with another man who led her on and caused her break up her marriage. She’s also an art historian living across the hall of a couple hosting a dinner party (Amanda Peet is a movie director trying to woo a financial backer, and Will Ferrell is her out of work actor-husband). She knocks on their door after taking 28 sleeping pills. Of course Amanda Peet’s character doesn’t want her dinner party wrecked so she insists everyone continue eating before the food gets cold. Then Melinda states she needs to throw up, and the response by Will Ferrell’s character is “No, no, no. Not on the carpet. That’s new carpet.” Yes, very comedic, and eventually she gains the attention of the out-of-work-actor-husband, spends a little time with him, and his reactions to her dating another man brings the comedy to the story.

Now this got me thinking: What if we took a similar set up, wrote it out, and left it in a place where a single word could turn the scene into the beginning of a tragedy, or a comedy?

So I’d like for you to decide not only the ‘turning word’ in this opening scene, but the following sentences to show exactly how this particular scene is either tragedy or comedy:

The sounds of life and laughter coming from the apartment caused her to hesitate. But the silent silky darkness of the hallway pushed her to knock on the door regardless. So what if they were having a good time in there? She needed help and there were no other signs of life in the building.

“I-I’m sorry to interrupt, but I didn’t know what else to do.” She pushed her way through the door, past her neighbor, Emily. The sounds coming from the dining room magnified in her head.

“What’s wrong?” Emily asked, wrapping an arm around her shoulders. She guided her into the kitchen.

Show your craft. Show your creativity. Show how you can turn this scene into tragedy or comedy.

4 thoughts on “Writerly Wednesday: How a Scene Can Turn on a Word – Comedy or Tragedy?”