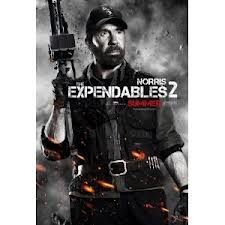 I know I’m not the only person who, after watching a wicked action flick, has said to themselves: “Daaaaamn…. I really want one of those guns!” Truth be told, I find myself saying something along those lines at least three or four times per movie. More if it’s a damn good movie. *grin*
Last month, the hubby and I watched The Expendables 2, and this was one such movie where I didn’t just want to have one of the weapons for myself, but I actually wanted one of the characters in my WIP to have one of those weapons. Especially the assault rifle Chuck Norris’s character uses. *shudders at the mention of Chuck*
Now, because I’m the not best when it comes to the name and type of gun in a movie (I usually refer to them as, “Chuck’s gun, or Liam’s sniper, or the really, really loud one!”), and also because I can’t just bug one of my buddies all the time when I want to change up the weapons being used in my WIP, I set out for a quick search on Google, and I discovered…
The Internet Movie Firearms Database
I love, love, love this database! I’ve always loved the regular Internet Movie Database, and I wish I had discovered sooner that there was a database specific to movie firearms. And – BONUS! – they don’t just cover firearms you see in movies. *cheers* They also cover firearms in TV, Anime, and Video Games, and you can also simply search by the actor. So if you want to know of every gun Sandra Bullock has ever used in his film career, this site will tell you.

So now that I have discovered this particular database, I now know the following about the gun that Chuck Norris’s character used in the movie:
·         It’s a Heckler & Kosh G36C, an assault rifle, introduced in 2001
·         It weighs 6.2 lbs
·         Its fire mode is Semi-Auto/Full-Auto.
·         I can also say there’s also a G36, a G36K, and a MG36.
·         The G36C has been used in at least 40 films, 30 Video Games, and 14 TV shows.
o   Well-known actors who have used this weapon in film: Gerard Butler (Tomb Raider: The Cradle of Life & Gamer), Martin Lawrence(Bad Boys II), Vince Vaughn(Mr. & Mrs. Smith), and Clive Owen(Shoot ‘Em Up)
·         And because I now know the name of the weapon, I can skip on over to YouTube and see how this baby works in real life, especially since there’s no way in hell I’m gonna get to actually use one anytime soon.
There’s no way on earth I could’ve told you that much information on this weapon. No. Way.
But now that I have this resource, my projects and characters will have no shortage whatsoever when it comes to their selection of weaponry.
And of course I had to share with all of you! I mean, right behind thinking of the many, many ways we can kill a character off are the many, many weapons we can incorporate into our story. And if you’re like me, this particular task takes time because you have the find the right weapon for your character. It has to look and feel like something your character would whip out in the middle of a battle.
Your Turn: Do any of your characters use firearms? If so, how were you able to find and choose which firearm was right for them? Do you have another resource you use for weaponry? If so, please share!